Autism spectrum disorder (ASD) is a highly heritable neurodevelopmental disorder that affects 1 in 54 children in the United States and co-occurs more frequently with attention-deficit/hyperactivity disorder (ADHD) than with any other mental disorder in children. Approximately 30-75% of children with a diagnosis of ASD have symptoms of ADHD. However, studies on the co-occurrence of ASD and ADHD are complicated by the fact that while both disorders have an age-of-onset during early childhood, ASD is typically diagnosed earlier (i.e., ages 1-4) than ADHD. This means that many young children with ASD who are treated with intensive behavioral interventions might also develop ADHD symptoms later on, which has its own set of pharmacological and psychosocial interventions that are unique from those for ASD. Evidence-based treatments that are tailored for children with ASD who
also present with commonly co-occurring ADHD have yet to emerge.

This study, named the University Of Wisconsin Longitudinal Imaging and Neurogenetics in Kids Study (UW LINK), will follow approximately 120 children with ASD aged 4-7 (at Time 1) for three years. The purpose of this research is to identify biological and behavioral candidates for early screening and diagnosis of ASD and ADHD, where early interventions for these disorders can significantly reduce the long-term negative impact on individuals and their families. This study will take an innovative, multi-faceted approach to investigating the etiological mechanisms underlying ASD and co-occurring ADHD in children through the use of genomics, behavioral phenotyping, neuroimaging, stem cells, and machine learning.

The UW LINK Study is funded by the Eunice Kennedy Shriver National Institute of Child Health and Human Development (P50HD105353). 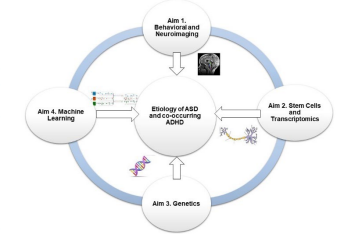